Facebook’s ‘Fake News’ Problem & How They’re Dealing With It

Last December, Facebook announced that they were going to start tackling ‘fake news’ on their platform. This came after Facebook was accused (not proven) of contributing to the US presidential election result because they were providing a channel for questionable news to be shared.

The most recently noted incident happened just before St. Patrick’s Day with a story that falsely claimed thousands of Irish people were brought to the United States as slaves.

Upon this false story, users noticed a new ‘disputed’ alert popping up when attempting to share it on Facebook. 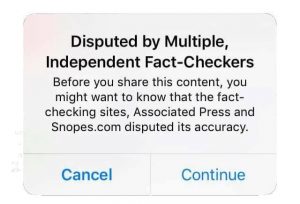 It’s a huge task for Facebook to stop the spread of this false information as there is just too much content for anyone to vet manually. Their new verification and algorithm for identifying a fake new story seems to be doing the trick though with Facebook partnering with fact checkers including FactCheck.org, AP, ABC News, Snopes and Politifact. The ‘disputed’ feature has only been rolled out in the United States so far

At the end of the day, users are still allowed to post stories marked as disputed, however this disputed note will show up on the post.

How This Affects Your Business

It’s pretty simple really. We wouldn’t advise posting any articles that are claimed to be disputed, as it can hurt your business’s reputation. Stick with the factually proven news 🙂