Instagram is actively working against anti-social and other worrying behaviors. Instagram has begun to implement tools and features to promote user well-being such as removing the number of likes visible to users on photos.

Instagram’s latest update concerns its policy enforcement. This new feature will show a warning that states, “Your account may be deleted” followed by a time-stamped list of previous policy infractions. This allows users to see a summary of instances in which they were reported to Instagram and policy violations were documented. 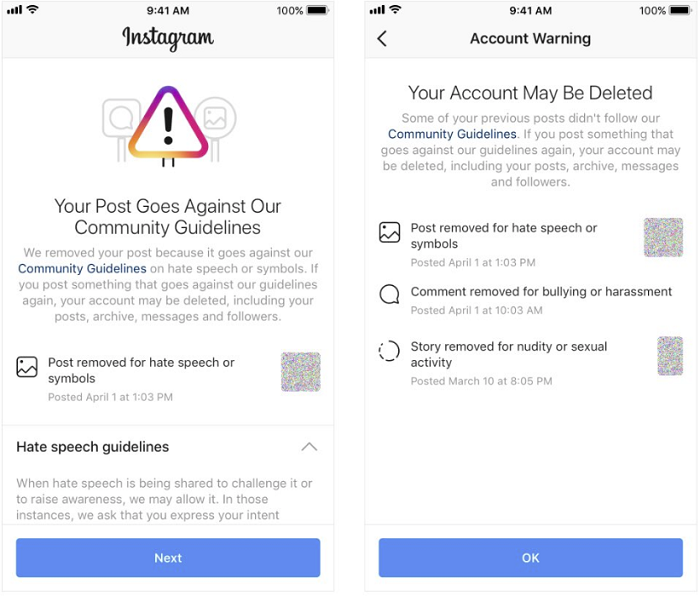 This allows Instagram to keep an updated record of infractions a particular account has with the platform’s policy. Instagram can now take action against accounts that have ongoing concerns as opposed to exclusively responding to reports as they come in.

However, this also adds a layer of complexity in reporting posts and comments. Even if a comment or post may have been reported incorrectly, there is now a risk of that report showing up on a user’s record with Instagram. But Instagram already has a plan to combat false reporting.

Instagram has updated its appeals process–now accessible from the app–to allow incorrect strikes to be removed.

“To start, appeals will be available for content deleted for violations of our nudity and pornography, bullying and harassment, hate speech, drug sales, and counter-terrorism policies, but we’ll be expanding appeals in the coming months. If content is found to be removed in error, we will restore the post and remove the violation from the account’s record.”

As a whole, it is encouraging to see Instagram taking the necessary steps to combat accounts that are working against the platform’s creative mission. We need more platforms to prioritize safety and user well-being as Instagram’s example has set.

What do you think about the update? Let us know in the comments below!